2006–present
Dorcas Wright "Dede" Gardner is an American film producer and the president of Plan B Entertainment, a production company founded by Brad Pitt. She is most known for producing 12 Years a Slave (2013), World War Z (2013) and The Big Short (2015).

She is currently serving as an executive producer for the FX drama anthology series, Feud.

Gardner always had an interest in movies as a child, so while she was attending Columbia, she started working on a student film doing locations. She continued doing location management and working in the art department for awhile and then decided that she wanted to learn more about where movies came from. She began working with a small agency, absorbing the theater world, and then worked at William Morris to learn about the book world, before making the move to Los Angeles.

Sometime after, Brad Pitt began looking for someone to run his company, Plan B Entertainment. Gardner embarked on a series of interviews, which landed her the job as president. The first movie at Plan B was Ryan Murphy's Running with Scissors (2006), which Gardner worked on extensively. She partnered with Murphy again in 2008 for the television film Pretty/Handsome. She then went on to produce The Time Traveler's Wife (2009), Eat Pray Love (2010), and The Tree of Life (2011), for which she was nominated for the Academy Award for Best Picture. Most notably, she has produced World War Z (2013), 12 Years a Slave (2013), for which she won the Academy Award for Best Picture, Selma (2014) and The Big Short (2015), both of which were once again nominated for the Academy Award for Best Picture, and Moonlight, which garnered almost unanimous praise from critics. She is now currently working as executive producer for Ryan Murphy's drama anthology series, Feud.

On September 9, 2000, she became married on Martha's Vineyard to Jonathan Boris Berg, the owner of Berg-Saccani Entertainment, a film production company in Los Angeles. The Reverend, Dr. Frank M. McClain, an Episcopal priest, performed the ceremony at the Old Agricultural Hall in West Tisbury, Massachusetts. Mr. Berg graduated from the University of Wisconsin, and is the son of Dr. Monika K. Berg and Dr. Jack F. Berg of Lexington, Massachusetts. His mother is a dermatologist in Framingham, Mass. His father is a cardiologist at the Melrose-Wakefield Hospital in Melrose, Mass. 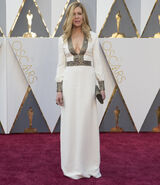 Retrieved from "https://feud.fandom.com/wiki/Dede_Gardner?oldid=2580"
Community content is available under CC-BY-SA unless otherwise noted.