Gary Merrill is a recurring character on the first season of Feud. He was an American film and television actor and the former husband of Bette Davis. The couple were co-stars in the drama film All About Eve and became married in 1950, before eventually getting divorced after ten years together.

He is portrayed by Mark Valley.

Gary is first introduced as Joan Blondell describes the details of his relationship with Bette Davis via an intimate interview in 1978. She explains that due to Bette's fading acting career, she decided to take on the role of wife and mother, and became married to Gary, her All About Eve co-star. Unfortunately, things didn't work out so well, and the pair ended up getting divorced after ten years together.

The storyline then returns to 1961, showing Bette returning home from a long night out. She goes into her room to find Gary sitting in her armchair, and she does not appear very happy to see him. She asks him to unzip her dress while he asks about her relationship with Joan Crawford, as he had read in the tabloids that they were to begin shooting on Baby Jane the following week. She excitedly states that she gets to kick Joan in the head on day five of filming and asks Gary why he decided to come back to Hollywood. He reveals that he got cast in The Twilight Zone, and Bette sarcastically remarks that that their whole marriage was a Twilight Zone, one day playing on-screen lovers and the next being together in real life. Gary questions why they ever decided to stop living together, and Bette explains that he expected too much of her and wanted her to tend to his every need. However, Bette was the one that needed to be taken care of, not the other way around.

Gary then tells Bette that he has something for her - something that she has waited a long time for. He reaches into a box and hands her a document, which turns out to be their official divorce agreement. Gary explains that he is leaving her with the house, kids, and bank account, but instead of being content, Bette angrily calls him a prick. Gary sets her straight and tells her that he knows she doesn't want to be with him, but that she just can't stand the idea of him being with anyone else, which is why she is being hesitant about the divorce. The two then briefly start insulting each other, with Gary calling Bette a viper, and Bette calling Gary a broken down has-been and a drunk. However, they both laugh it off right after and begin passionately kissing, clearly demonstrating that they still have romantic feelings for one another, even with their impending divorce.

Joan Blondell then explains via voiceover that it was never the sex that caused tension in their relationship, but rather it was Gary's terrible acting that was the main issue. When Bette realized that their marriage was coming to a close, she decided to take her Broadway show, The World of Carl Sandburg, on tour. Gary was co-starring with Bette in the show, and a brief clip shows him delivering an emotionless monologue to a bored and disappointed audience. Discouraged with Gary's awful onstage presence, Bette ultimately opted to fire Gary from the tour and replace him with another actor, Barry Sullivan, the very next day, which only further strained their relationship.

Back to the 1960 flashback, Bette and Gary have just finished being intimate, and as Gary is asleep in Bette's bed, she gets up in the middle of the night to look over the contents of the divorce papers. Clearly distressed, Bette has an internal battle over whether she should sign the papers or not, but ultimately she decides to do so before going back to bed. When Gary awakens the following morning, he sees the papers sitting on the nightstand and puts them in his pocket before departing for good. 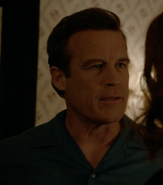 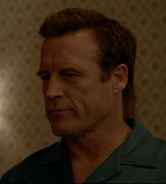 Retrieved from "https://feud.fandom.com/wiki/Gary_Merrill?oldid=3673"
Community content is available under CC-BY-SA unless otherwise noted.