Jack Leonard Warner is a main character on the first season of Feud. He was a Canadian-American film executive who was the president and driving force behind the Warner Bros. Studios in Burbank, California. He was responsible for the distribution of the 1962 Oscar-nominated film What Ever Happened to Baby Jane?, which instigated the off-screen rivalry between Bette Davis and Joan Crawford.

He is portrayed by Stanley Tucci.[1]

Jack is first seen in his office, laying on a massage table, receiving a massage from a female masseuse. After being rejected by several studio executives, Robert Aldrich walks in to propose his ideas to Jack, requesting that he distribute his upcoming film What Ever Happened to Baby Jane?, which will star Bette Davis and Joan Crawford.

Jack's immediate response is to ask Robert whether or not he would sleep with the stars, expecting Robert to decline, as the women are both older and no longer considered attractive by Hollywood standards. However, Robert claims that he would sleep with them, and Jack calls bullshit and laughs in his face. He gives Robert a hard no and explains that he considers it disrespectful that Robert came to him as an absolute last resort, but Robert tells him that it's fate, as Warner Brothers was the studio where both Bette and Joan worked when they were still under contract.

Jack then tells his masseuse to stop and gets up from the massage table, as he explains to Robert that both Bette and Joan made his life a living hell when they worked for him. He says that they treated him as if he worked for them, not the other way around, and were always looking for more perks and questioning the material that he wanted them to do. The masseuse then helps Jack into his robe, and as she is leaving, he gives her a quick slap on the butt, clearly startling her.

Jack then goes on to say that he was astonished by the amount of ingratitude shown to him by the actresses, despite the fact that he has made them into the stars they are today. He also calls Robert out for his poor memory, explaining that Bette sued him in 1963 to get out of her Warner Brothers contract. He tells Robert that he was so upset about the lawsuit that he developed an ulcer and multiple hemorrhoids from it. He also reveals that although he won the suit and Bette was ordered to continue working for him, she still ended up causing the entire downfall of the studio contract system, thus making it more difficult for him to reel in new actresses. An angry Jack then scolds Robert for wanting him to work with Bette after all this, calling him crazy and saying he will never again deal with Bette. He slams his hands on his desk and calls Bette a cunt, stating that her unemployment is simply his long-simmering revenge.

Robert is taken aback at first, but eventually stands up to assert himself, demanding Jack to distribute his picture. He tells Jack that he needs Baby Jane, as television is beating out the film industry and all of his recent movies are bombs. He explains that Jack doesn't have stars, but he does, along with a great script that he wrote himself and a genre that television isn't doing - horror. Jack ponders the thought for a moment, before delivering Robert with another "no." Robert then explains that he received funding from Seven Arts, and that he just needs Jack to release the film in his theaters, but Jack still remains unconvinced. However, Robert then tells Jack that he can be the single largest profit participant. He offers to pay Jack first, and since money is his favorite language, Jack ultimately agrees.

Sometime thereafter, Robert and Jack attend a press interview for Bette and Joan to discuss their roles in Baby Jane and to publicly sign their contracts. The actresses give comical remarks about their characters, and Robert stands there laughing, as Jack looks completely stale and uninterested. Robert comments that he told Jack that Bette and Joan were an event together, but Jack is noticeably annoyed, stating that he can't believe Robert actually talked him into this. 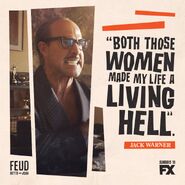 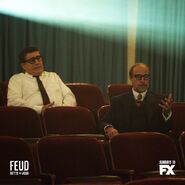 Retrieved from "https://feud.fandom.com/wiki/Jack_Warner?oldid=4920"
Community content is available under CC-BY-SA unless otherwise noted.