Stanley Tucci is an American actor, writer, producer, and film director. He has appeared in such films as The Devil Wears Prada (2006) and Julie & Julia (2009), both opposite Meryl Streep, and as Caesar Flickerman in The Hunger Games and its sequels, Catching Fire, Mockingjay – Part 1 and Mockingjay – Part 2. Tucci was also nominated for an Academy Award for Best Supporting Actor for his performance in The Lovely Bones (2009), and he won two Emmy Awards for his performances in Winchell and Monk.

He is starring in the first season of Feud as Jack Warner.

Tucci was born in Peekskill, New York, and grew up in nearby Katonah. He is the son of Joan Tropiano, a secretary and writer, and Stanley Tucci, Sr., an art teacher at Horace Greeley High School in Chappaqua, New York. Stanley is the oldest of three children, his sister being fellow actress Christine Tucci, and screenwriter Joseph Tropiano is a cousin. Stanley's parents, both of Italian descent, had roots in Calabria, Italy, and during the early 1970s, the family spent a year living in Florence, Italy. Stanley attended John Jay High School in Cross River, New York, and Purchase State College in Purchase, New York, where he majored in acting and graduated in 1982.

Tucci earned his Actors' Equity card when actress Colleen Dewhurst, the mother of Tucci's high-school friend, actor Campbell Scott, arranged for the two young men to have parts as soldiers in a Broadway play in which she was co-starring, The Queen and the Rebels, premiering September 30, 1982. Tucci's official film debut was in Prizzi's Honor (1985), and he later performed at the Yale Repertory Theater in 1991 in a Molière play.

Tucci is known for his work in films such as The Pelican Brief, Beethoven, Kiss of Death, Road to Perdition and Big Night, and in the television series Murder One, as the mysterious Richard Cross. Big Night (1996), which he starred in, co-wrote with his cousin Joseph Tropiano, and co-directed with Campbell Scott, premiered at the Sundance Film Festival. The film also featured his sister Christine and their mother, who wrote a cookbook for the film. It won him and Tropiano the Independent Spirit Award for Best First Screenplay.

Tucci has been nominated three times for Golden Globes, and won twice – for his title role in Winchell (1998), and for his supporting role as Adolf Eichmann in Conspiracy (2001), both for HBO films. He also received a Screen Actors Guild Award nomination for Winchell. In addition, he was nominated for a Tony Award as Best Actor in a Play for his role as Johnny in the 2002 revival of Terrence McNally's Frankie and Johnny in the Clair de Lune.

In 2004, Caedmon Audio released an audio-book of Tucci reading Kurt Vonnegut's 1973 novel Breakfast of Champions. In July 2006, Tucci made an appearance on the USA TV series Monk, in a performance that earned him a 2007 Emmy for Outstanding Guest Actor in a Comedy Series. Shortly after, Tucci starred in the TV medical drama 3 lbs., which debuted on CBS on November 14, 2006, but was cancelled that November 30th due to low ratings. In 2007, Tucci had a recurring role in the medical drama, ER. He also provided the voice over in the AT&T "Raising the Bar" marketing campaign.

In 2009, Tucci portrayed George Harvey, a serial killer of young girls, in The Lovely Bones, Peter Jackson's adaptation of Alice Sebold's novel, for which he received Golden Globe and Academy Award nominations. To prepare for the role, he consulted with retired FBI profiler John Douglas. The following year, Tucci directed a revival of the Ken Ludwig play Lend Me a Tenor on Broadway, starring Tony Shalhoub. In 2011, Tucci played Dr. Abraham Erskine in Captain America: The First Avenger. Most notably, he has appeared in such films as The Devil Wears Prada (2006) and Julie & Julia (2009), both opposite Meryl Streep, and as Caesar Flickerman in The Hunger Games and its sequels, Catching Fire, Mockingjay – Part 1 and Mockingjay – Part 2.

Tucci was also the co-owner of the Finch Tavern restaurant in Croton Falls, New York. It has since been sold and the menu changed to more traditional Italian-American cuisine. Tucci's cookbook, The Tucci Cookbook, was released in Autumn 2012. On September 24, 2013, Variety and Entertainment Weekly reported that Tucci will guest voice-star in the long-running adult animated series American Dad. The episode slated to air as part of the show's 10th season (2013–14). In January 2015, Tucci was cast as one of the leading roles in Screen Gems horror-thriller film Patient Zero, along with Matt Smith and Natalie Dormer. Currently, he is starring in the FX drama anthology series, Feud, as former Warner Bros. President, Jack L. Warner.

Tucci's first wife, Kathryn "Kate" Tucci (b. 1962), died of breast cancer in 2009. She was a social worker and former wife of actor and stage manager Alexander R. Scott, the elder son of actors Colleen Dewhurst and George C. Scott. She and Tucci married in 1995 and had three children together: twins Nicolo Robert and Isabel Concetta, who were born in Manhattan on January 21, 2000, and daughter Camilla Tucci, born in 2002. They also raised Kate's two children from her previous marriage. The couple legally separated in February 2003, during which Tucci had a brief relationship with Edie Falco from April 2003 until March 2004. However, in 2005, Tucci and Kate reconciled after Kate discovered she had breast cancer, and the pair remained together until her death in 2009. Tucci stated afterwards that he was not in the room with Kate when she passed, as he knew it would be so devastating that he wouldn’t be able to take care of the kids after.

In 2011, Tucci became engaged to Felicity Blunt, an English literary agent and the elder sister of Tucci's The Devil Wears Prada co-star Emily Blunt, who introduced the couple at her wedding to John Krasinski, several years after they worked together on Prada. Tucci and Blunt married in a civil ceremony in summer 2012, followed by a larger observance at Middle Temple Hall in London on September 29, 2012. After moving their home from New York to London, on October 19, 2014, Tucci and Blunt announced that they were expecting their first child together. On January 25, 2015, Blunt gave birth to the couple's son, Matteo Oliver. The family currently resides in the leafy London suburb of Barnes (UK).

On September 12, 2016, Tucci, as well as Cate Blanchett, Chiwetel Ejiofor, Peter Capaldi, Douglas Booth, Neil Gaiman, Keira Knightley, Juliet Stevenson, Kit Harington, and Jesse Eisenberg, were featured in a video from the United Nations' refugee agency (UNHCR) to help raise awareness to the global refugee crisis. The video, titled "What They Took With Them", has the actors reading a poem, written by Jenifer Toksvig and inspired by primary accounts of refugees, and is part of UNHCR's #WithRefugees campaign, of which also includes a petition to governments to expand asylum to provide further shelter, integrating job opportunities, and education. 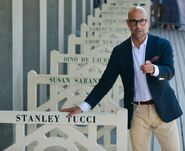 Retrieved from "https://feud.fandom.com/wiki/Stanley_Tucci?oldid=4102"
Community content is available under CC-BY-SA unless otherwise noted.